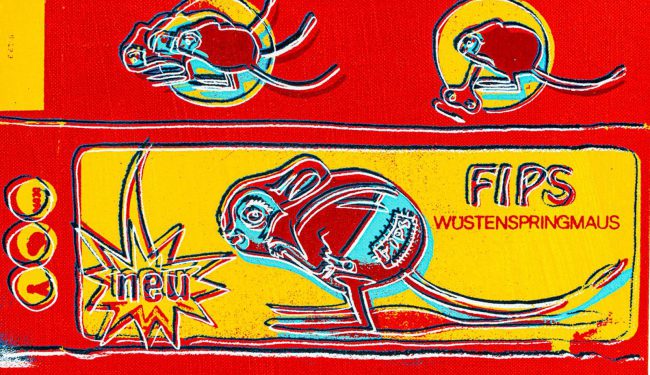 LOS ANGELES — A strong, 408-lot sale broke out at Abell Auction on October 18, bringing to the fore a mix of fine art, design and jewelry that brought in a total of just over $2 million in
gross sales.

Taking the top of the sale was a small, 8-by-10-inch original “Fips, Mouse” by Andy Warhol (1928-1987), synthetic polymer paint and silkscreen ink on canvas, that sold for $87,000. Warhol created a series called the “Toy Paintings” and exhibited them at the Zurich gallery of Bruno Bischofberger in 1983 in an exhibition titled “Paintings for Children.” During that exhibition, each work hung at the eye level of a toddler, forcing any adult viewer to crouch to see them. Warhol said the works were inspired by his collection of childhood toys. Joe Baratta, senior vice president of business development and evaluation at Abell was pleased to bring the original to the market. “We sell a lot of Warhol multiples, but in my history here we have never sold a painting,” Baratta said. “Even though it was a modest size, it’s a good price for a Warhol original.”

Six works by Scottish artist Philip Jackson (b 1944) were sold from the estate of Lee Phillip Bell, co-creator of The Young and the Restless and The Bold and the Beautiful. Jackson has numerous public commissions throughout the United Kingdom and serves as the Royal Sculptor to Queen Elizabeth II. Highest among his works in the sale was the largest, a standing masked figure in bronze, 97 inches high, that brought $53,125. Only two of the artist’s works have ever sold higher at auction. Behind at $46,875 was “The Sentinels,” a group of three standing bronze robed figures, each 26 inches high. “Those were outstanding prices,” Baratta said, noting that the majority of them sold to a single international collector.

In furniture, a “Nuage” or “Cloud” coffee table by Guy De Rougemont (b 1935) in brass and plexiglass brought a good price at $81,250. Rougemont’s first cloud table was created per a commission by French decorator Henri Samuel in the 1970s. Perhaps the most notable furniture in the sale was a suite of seven Sam Maloof designs from the estate of Lynn Altman that were sold to benefit art acquisitions at the Huntington Library, Art Museum and Botanical Garden. Leading the group at $25,000 was a set of 12 walnut dining chairs produced in 1966 with spindle backs. Behind at $16,250 was the dining table, also in walnut and made a year later in 1967. Taking $13,750 was the last piece of the dining suite, a three-piece walnut buffet made in 1962. The gross on Altman’s Maloof works totalled $81,875.

“The market for contemporary furniture and graphics continues to be strong,” Baratta said. “I was pleasantly surprised by the prices for certain things.” All prices reported include buyer’s premium. For information, www.abell.com or 323-724-8102.

Join our email list for information on upcoming sales!